The Topic, the Message and the Partition

Traditional messaging patterns: message queue and publish – subscribe, have some limitations as a result of their design.

In the previous post – Apache Kafka Ideas – Part 1, a couple of messaging use cases were introduced. In order to define those cases with Kafka, it is important to understand its ideas. At the very heart of Kafka are topics and partitions. This post explains basic concepts behind them.

A topic is an abstract entity, which acts as a mailbox for messages. Each message in Kafka has to be sent to a topic. Kafka uses the follwoing naming conventions:

Partitions unlike topics have physical representations in Kafka. Each message is persisted on a disk within a partition: 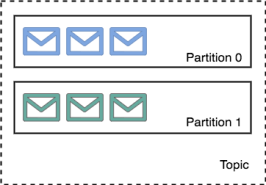 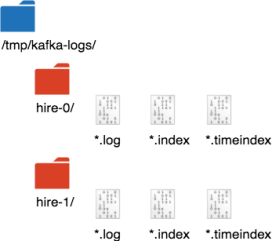 The additional *.index and *.timeindex files support Kafka engine in looking up messages that are stored on a disk. /tmp/kafka-logs is the logs root defined in a broker’s configuration. In the example above, the topic’s name is hire. The partitions (folders hire-0 and hire-1) are stored directly under the messages’ root, hence the topic folder is not maintained.

There are certain rules that define how messages are delivered to a particular partition – these will be covered later in the series. For now let’s assume that when a message is sent, it will go to a partition that meets the follwoing equation – let’s call it round robin selection:

In Kafka, a partition is a structured commit log. It means that:

Offset is never reset! It is Java’s Long, which means that 2^63 – 1 messages can be stored in one partition. If 1 million messages were sent per second, a producer would need 292 471 years to fill up the whole partition.

In the next post we will discuss consumer groups which would allow to finally define an alternative solution for the message queue and the publish – subscribe traditional patterns.