Do you use CentOS or any other rpm based Linux distribution to host Java applications or services?
In this article you will see how Gradle can be used for that purpose, in particular: 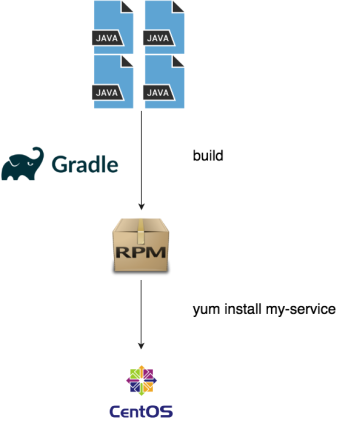 The goal is to use yum installer to download, install or update java application or service. Yum uses rpm version comparison to detect updated versions of packages. In order to be able to achieve this goal, it is important to understand how rpm compares versions.

There are many articles on the internet, hence I will stay DRY and provide some links that can be useful:

According to Red Hat’s guidelines:

Gradle has 2 plugins that can support rpm generation:

The ospackage plugin allows rpm generation with Gradle. It has special values to define version, release, package name and other RPM related metadata. It comes with a predefined buildRpm task. See documentation for more details.

Git-version allows to use git information to add to the package name. According to current documentation the defaults are as follows:

One example of version and release naming can be the follwoing algorithm:

Below is the implementation of the algorithm described above. Notice highlighted values from ospackage plugin – there can be many more.

Now it is time to run gradle buildRpm. Examine build/distributions folder for rpms. Some examples of generated packages with git tag rc@1.0.0 and gradle project of name gradle-rpm-example:

Assuming that these rpms have been stored in a yum repository (for example nexus), and this repository has been added to yum, given the fact that this example follows rpm comparison rules, subsequent rpms will be visible by yum as updates of the application or service. To list available yum repositories run yum repolist. Example output might be:

It is worth to remember that yum uses local cache, hence it is worth invalidating it if the updates are not visible.

This command can generate output similar to the one below:

To install the package run

If the second package is now uploaded to yum repo, after refreshing yum cache and running yum info gradle-rpm-example it is clear that there is an update available:

Running yum update –nogpgcheck gradle-rpm-example will update the package and new version will be installed.

Please note that in this example, rpm release numbers can increase by more than one, given there can be more than one commit since the package has last been built. RPM does not impose strict rules on release generation, and unless next release is greater than the previous, yum will handle updates without issues.

The example can be downloaded from GitHub repository.

This post illustrated how to build rpm package with Gradle as well as naming convention that could be used to allow yum updates of subsequent rpm releases.

What are your experiences with Java and RPM? It would be great to see different approaches to rpm generation and installation of software implemented in Java. If you can share your thoughts, please write in comments or contact me directly.

One thought on “RPM package generation with Gradle”